Errol Flynn Filmhouse, full even on a Wednesday lunchtime, deserves its brilliant reputation

Let’s start with the fact that this small, independent cinema in the heart of Northampton is fully booked on a Wednesday lunchtime. That in itself is a badge of honour that every cinema would love to be able replicate. And I don’t think it’s just down to the current film programme being shown. A contributory factor but not the reason why.

There was a palpable buzz on arrival at the building and as I approached the filmhouse entrance from inside the Royal & Derngate Theatre, the relaxed and cheerful atmosphere became more apparent. There was excited conversation, ladies indulging in a small glass of wine whilst catching up with friends and couples simply waiting happily for their film to start. This was obviously a location that was more than just a cinema. It’s a meeting place, a social event, a chance to be entertained by great film and most importantly, a well loved local institution.

The Errol Flynn Filmhouse in Northampton is an independent cinema, with two small screens offering both a mainstream and Arthouse film programme. Situated off Derngate in the heart of the town’s cultural quarter, it is a modern building, beautifully designed and crafted in Cedar wood cladding and open since 20 June 2013, the birthday of Hollywood icon Errol Flynn.

(Tasmanian born Errol Flynn spent 6 months as a member of acting company, the Northampton Rep (now known as Royal & Derngate), before heading to Hollywood. Thus the naming of the cinema in his honour.)

Having chosen to visit the cinema midday, midweek, I had the pleasure of watching a fairly mediocre film in the company of approximately 85, over 65’s as part of a Silver Screen performance. So two good decisions made that day. Silver screen performances are hands down the best audiences to be sat alongside for a film screening. No phones, no popcorn, no noise. Only the odd movement as people pop to the bathroom. Sheer bliss for a cinephile.

Back to the cinema…Once the slightly confused process of picking up my ticket for the Filmhouse was resolved, I headed to one of the two screens from inside the theatre. The Filmhouse is part of the larger Royal & Derngate Theatre however the cinema is located at the rear of the theatre, in two external standalone screens. The elegant design of the buildings has a distinctly Skandi feel about it, thanks to the Cedar cladding and this continues to flow internally through both screens. With luxury leather seats and side tables from Skeie in Norway, it coincides harmoniously with the relaxed atmosphere at the venue. 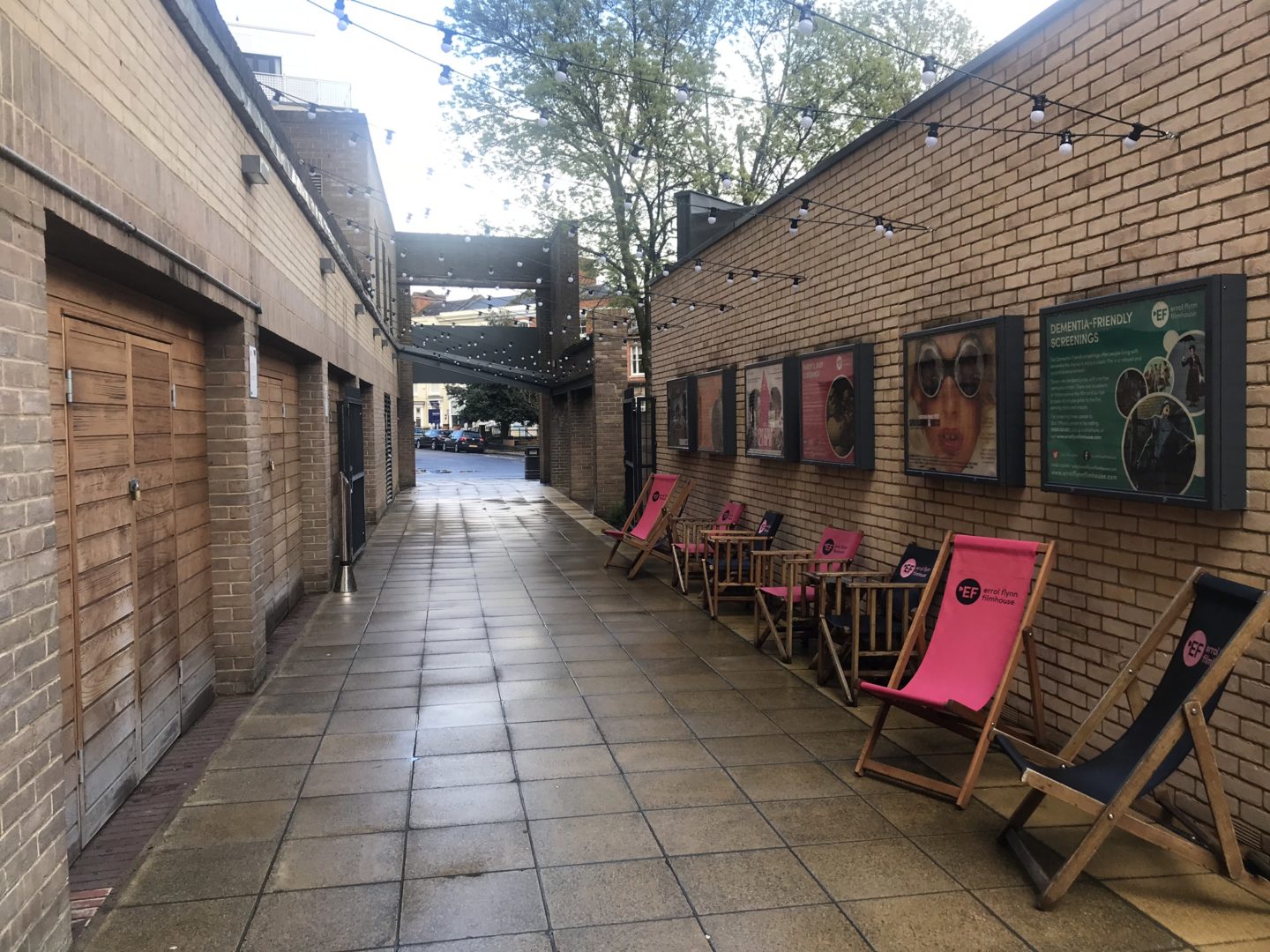 Screen One is the marginally larger of the two screens with 88 seats to Screen Two’s 83 seats. Both screens offer small licensed bars and accessible fixtures to cater for all audiences in their small foyers. This is also where, for future reference, you pick up your pre-booked tickets!

The bar for Screen One offers a well stocked range of alcoholic beverages, from sparkling wines to beer and numerous different types of snacks. No hot food is on the menu but popcorn is available albeit they appreciate that not everyone likes the noise it makes mid-film! Having chosen to go with a coffee and an ice cream, I was slightly delirious at being able to take my coffee in-screen in a ceramic mug. This is hugely under-rated by multiplexes at how important glassware is to a cinema audience. Drinking a coffee in a proper cup, not another non-recyclable takeaway cup and enjoying locally produced ice-cream took my appreciation for this venue up a notch.

Unlike other Independent or Arthouse cinemas available, there are no ushers or assistance to your seat however the staff at Errol Flynn were incredibly friendly and welcoming. The smile and thanks  I received for bringing back my crockery at the end of the film was definitely worth the effort. In-screen, there aren’t different seating options however all are well placed for optimum sight and sound benefits. Screens are smaller than average for 80 something seater screens however that does not impair the enjoyment of the film being screened.

Film wise, there is a varied film programme for those who like to enjoy foreign films and documentaries, you can enjoy many different Arthouse and Independent films as well as mainstream releases. Unlike the nearby multiplex chain, independent film shown here makes up over 60% of the programme. Consequently, this does determine the demographics of the audience that enjoy the venue. Not that anyone would complain about this.

There are numerous accessible screenings for those who are hard of hearing which makes this cinema a venue for all of the community to maximise. Parent and Baby screenings and Silver Screeners, as I witnessed, are well attended and competitively priced making it a real destination for all ages and wallets.

So for anyone who lives in Northampton or neighbouring towns such as Milton Keynes or Bedford – make Errol Flynn Filmhouse your cinema of choice. It is well deserving of it’s brilliant reputation, offering a refreshing change to the multiplex experience, from film programme to atmosphere whilst still being competitively priced. It might not offer on-site parking like most multiplexes or posh hand cream in the bathrooms found at luxury cinemas but it offers something far less superficial and endearing. You feel part of a community when you see a film here and the film programme really is to be recommended. And as such, it’s a cinema that cleanses the soul after visiting a certain multiplex chain that offers the same cookie cutter experience, whether in Northampton or Norfolk.

Find out more information about The Errol Flynn Filmhouse

Discuss in our community »

Anything Else
Spider-Man 2 (2004)
Kinsey
Inception
Spree
The Fast and the Furious
Malignant
Mulan: The IMAX 2D Exper...
Mulan in Disney Digital ...
Tenet
› Show all